On a Segway tour in Fort Lauderdale, visitors will take on an excursion through some of Florida’s best hot spots. Even better, this travel option is environmentally friendly, fast and easy to use. Take a glide with Segway Fort
Lauderdale.

If you’re asking yourself, “Where will we go on our Segway Fort Lauderdale tour?”, then this read is for you. Check out the Riverwalk, the historic Stranahan House, Wayne Huizenga’s mansion and others, skyscrapers,
yachts near Port Everglades, the biggest bridge in the city, and “The Venice of America.”

Wayne Huizenga’s mansion: Speaking of traveling green, Huizenga is the ex-owner of the major league teams including the Miami Dolphins, Florida Marlins, and Florida Panthers, and is the creator of Waste Management, a company that currently includes alternative fuel garbage trucks. In addition to the waste management industry, in 1994, he made $8.4 billion from selling Blockbuster Video to Viacom and $1.1 billion from selling 95 percent of his stake with the NFL’s Miami Dolphins in 2009.

Riverwalk: This is a 1.5 mile, brick-paved walkway along the water which is great for Segway use. Ride through the pretty sights of the biggest buildings in Fort Lauderdale and multi-million dollar yachts along “The Venice of America”.

Stranahan House: Originally belonging to an Ohio native Frank Stranahan, this home was built by him in 1901. The lower level of Stranahan’s home was used for trading, and the upper level was a community hall. Th
e trading business level later transitioned into a live-in space. Unfortunately two hurricanes hurt the economy of the residents around them, and Stranahan succumbed to suicide.

Port Everglades: This is one of the top three cruise ports in the world, with a record number of five-store ships. In the consumer industry, it’s the main seaport for South Florida’s petroleum products, including gasoline and jet fuel. The Port Everglades also brings in approximately $26 billion and employs over 201,000 people.

17th St. Bridge: This 55′ bridge gives travelers a glimpse of almost the entire city in one view and is the highlight of our two hour tour. At the top of the bridge, from a distance you can see downtown Fort Lauderdale, the beach line, and Port Everglades. The bridge includes an area for six traffic lanes, bike lanes, and a sectioned-off area for passenger rail and pedestrian sidewalks.

The Venice of America: Fort Lauderdale’s waterways are often called this, and is home to world famous yachts which cruise through here every minute of every day.

Segway Fun Facts: The Segway is a two-wheeled, self-balancing motor vehicle with zero emissions. Standing upright, with feet planted on a flat level and hands on the handle bars, this battery-powered traveling vehicle is easy to drive and includes regenerative braking capability. It was originally introduced in 1999 by Dean Kamen. The second round of Segways were released to the public in 2006. The second generation Segway includes lean-steer technology and a wireless info key controller which measures the battery life, miles driven, which mode it’s in, and also allows you to calibrate your speed anywhere from 6 mph to 12.5 mph. It also has an alarm which locks the wheels and makes noise if tilted forwards or backwards. Learn all about the Segway and it’s history on a tour with Segway Fort Lauderdale. 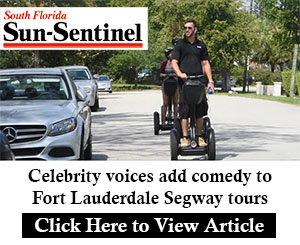 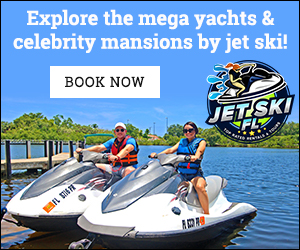